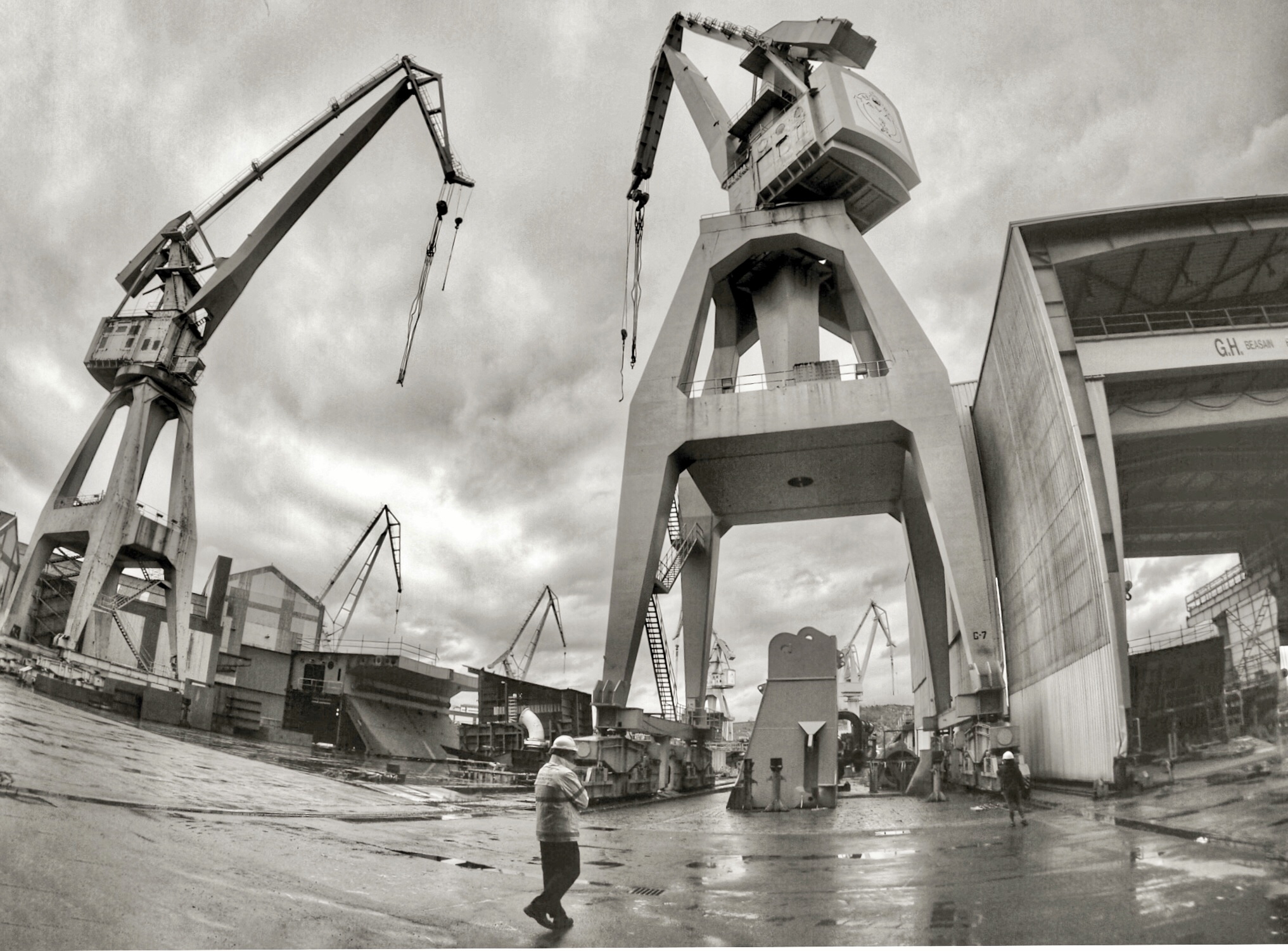 MOBILITY TO POLAND. 1st Photograph: “Shipyard” Taken by Agustín Díez Guinea represents the political and labour conflict in Poland and in the Basque Country in the 70s and in the 80s. When the oil crisis erupted in 1973, European areas where the main source of wealth was heavy manufacturing production, such as Basque Country and Poland, were hit dramatically. Although the reaction of both governments was completely different, in both countries, people took to the streets in big numbers to complain about their situation. The movement originated in the shipbuilding industry gained support from other sectors The Polish government decided to face the scarcity of basic necessities provoked by the crisis by raising food prices (butter by 33%, meat by 70%, and sugar by 100%) while wages stagnated. As a result, the living conditions of the already impoverished citizens became unbearable. This situation led to the formation of underground networks to fight against the implemented measures. Labour unions were an important part of the network. The rise of a combative spirit throughout the country propelled the transformation of the strikes over food prices into solidarity strikes on other issues, such as the strike in sympathy for Anna Walentynowicz, fired from the Gdańsk Shipyard five months before she was due to retire. Meanwhile, the economic crisis initiated in 1973 was also affecting the economic pillars of the Basque Country: the iron and steel industry, the manufacturing industry and shipyards. Thus, the unemployment increased from a marginal rate in 1974 to 11% of the active population in 1979. One of the main characteristics of the 80’s was the industrial restructuring. The emblematic shipyard “Euskalduna” was closed down, while other shipyards, blast furnaces (closed in the 90s) and many manufacturing enterprises where firing workers. The unemployment in 1985 was close to 20% of the active population. The atmosphere was unbearable with trade unions calling for strikes, protests and demonstrations and clashes between police and marchers. 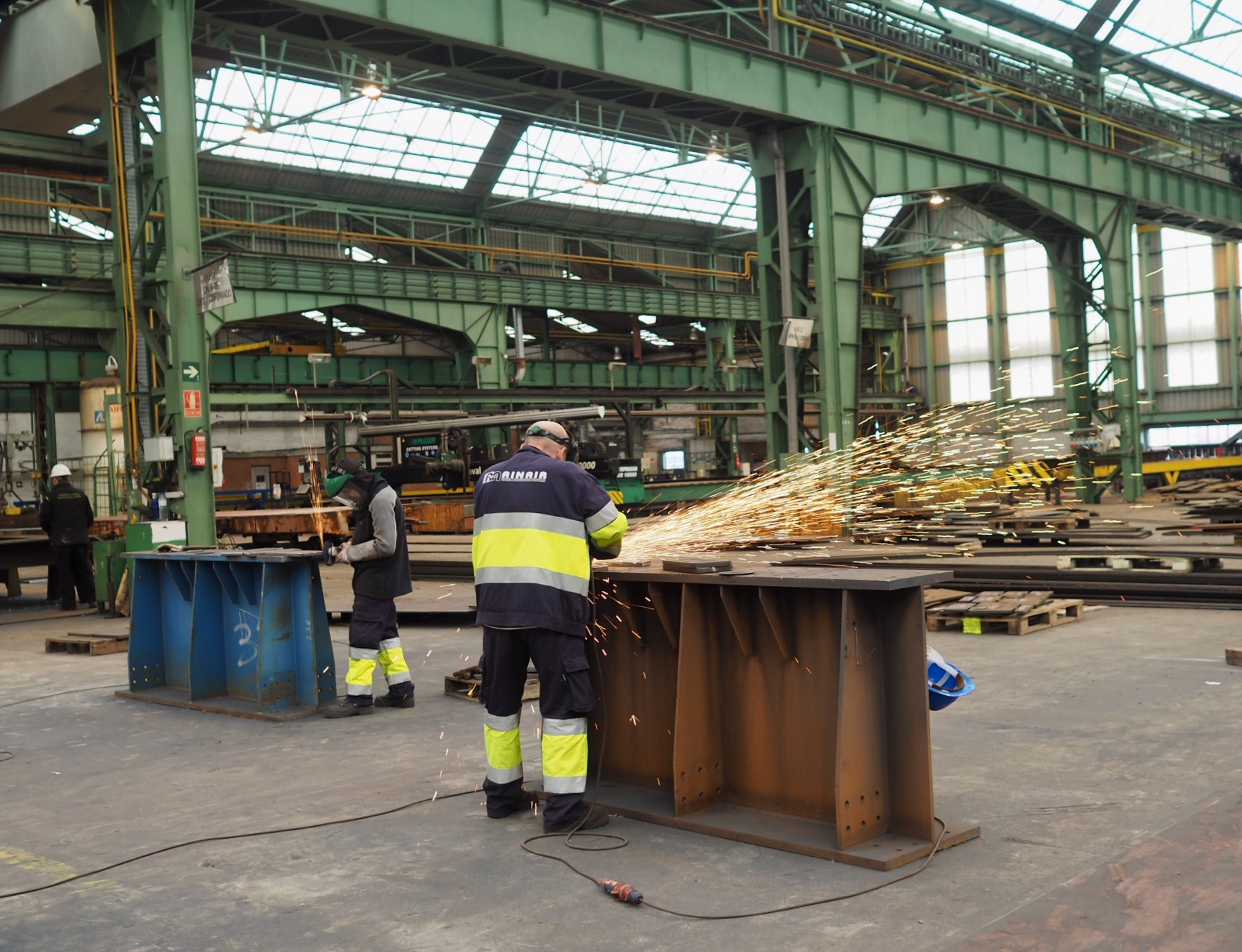 MOBILITY TO POLAND 2nd Photograph: “Workforce” Taken by Agustín Diéz Guinea represents the workers who were the most vulnerable part during the period of crisis. Fortunately, when the situation turned unbearable, they are able to organise themselves within trade unions and force the owners of the factories to negotiate. In Poland, the atmosphere created by the deterioration of the living conditions helped the emergence of the trade union Solidarność (Solidarity) in 1980, which rapidly won the majority of the union affiliation. The first years of the trade union were very hard: it went through an outlawed period: its members went to prison, and protestors were injured by the police in the demonstrations. There were also some cases of abduction and murder. Nevertheless, due to the workers’ resistance and the international media, Solidarność gained enough influence all over the world to force the government to negotiate and to call for elections in 1989. Thus, Tadeusz Mazowiecki was approved as Poland's first non-communist Prime Minister in 1989 and Solidarity Electoral Action (a political arm of the trade union) won the parliamentary election in 1997. Since then, Solidarność has been losing influence in Polish politics. In the Basque Country the big numbers of people taking the streets and fighting against the police forced the government to negotiate with trade unions. In the end, the workers affected by the industrial restructuring got early retirement and the labour conflict was reduced. 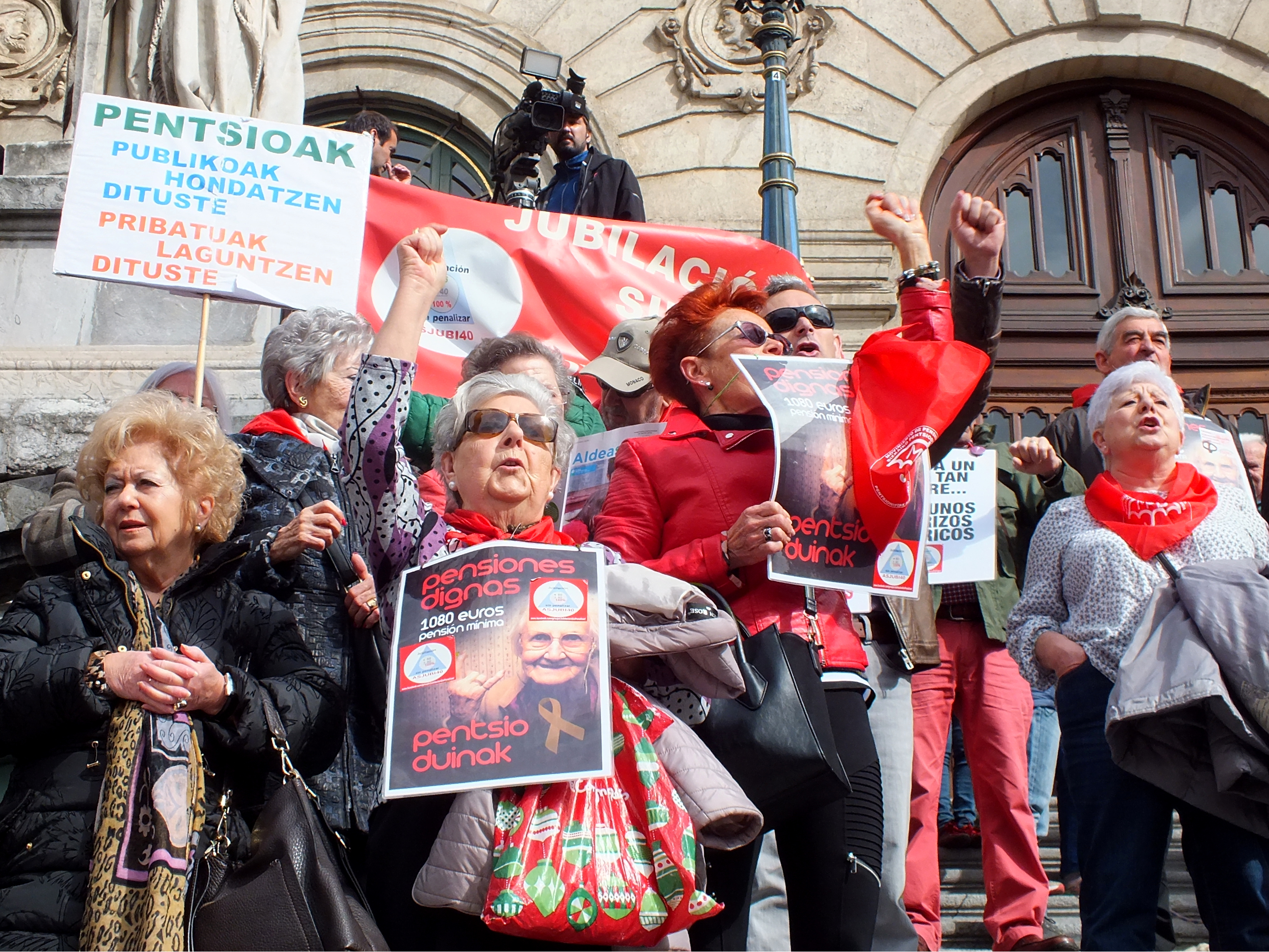 MOBILITY TO POLAND Third Photograph: “Vulnerability” Taken by Emma Baños Todd represents the disadvantaged groups of people in our current society. After reflecting on the matters in the 70s and 80s in both countries, we have concluded that in both cases the working class was a vulnerable group who suffered in a more callous way the deterioration of the economic conditions. Fortunately, they managed to gather enough strength and support to force the government to negotiate better conditions for them. For a long time, strikes and demonstrations have become one of the best options to express our views and demand our rights. That is why high numbers of people that believe in the same idea concentrate in big cities just to claim their rights or protest against social and political injustice. We have been looking throughout the Basque Country for current disadvantaged groups who are able to organize themselves to protest against their vulnerable situation and we found that the most representatives these days are retired and women. 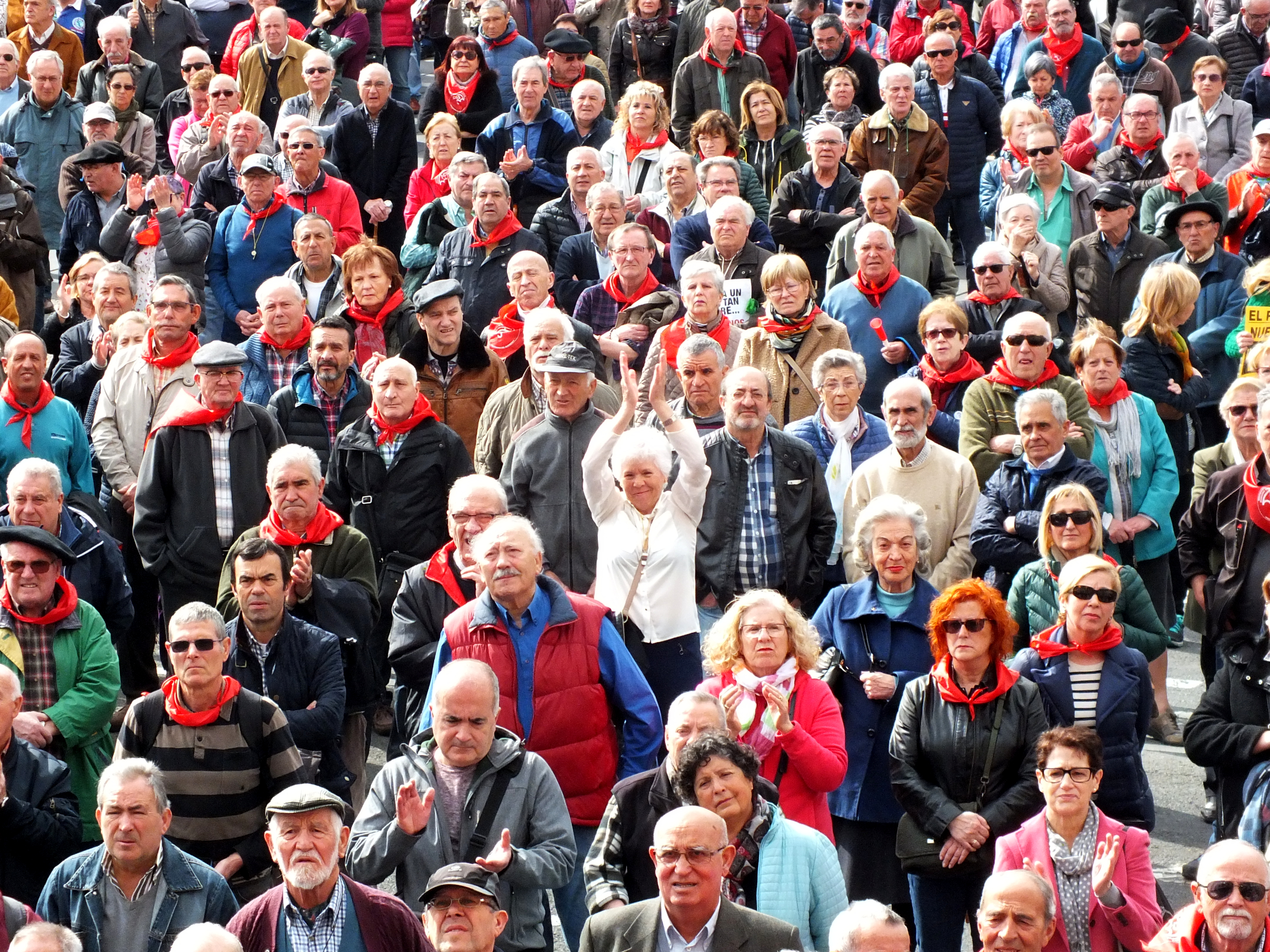 MOBILITY TO POLAND Fourth Photograph: “Retired” Taken by Emma Baños Todd represents our senior citizens. Retired people are claiming worthy pensions because they aren’t getting the money that they deserve. After spending most of their live working, many elderly make ends meet with serious difficulties because of their low retirement pension. They have been able to organize themselves. Pensioners wear red scarves and can easily be identified every Monday at 12 noon when they gather in front of the Town Hall in Bilbao to complain about their pensions and to publically demand increases in their state income. At these protests, people shout slogans and blow whistles to get attention. 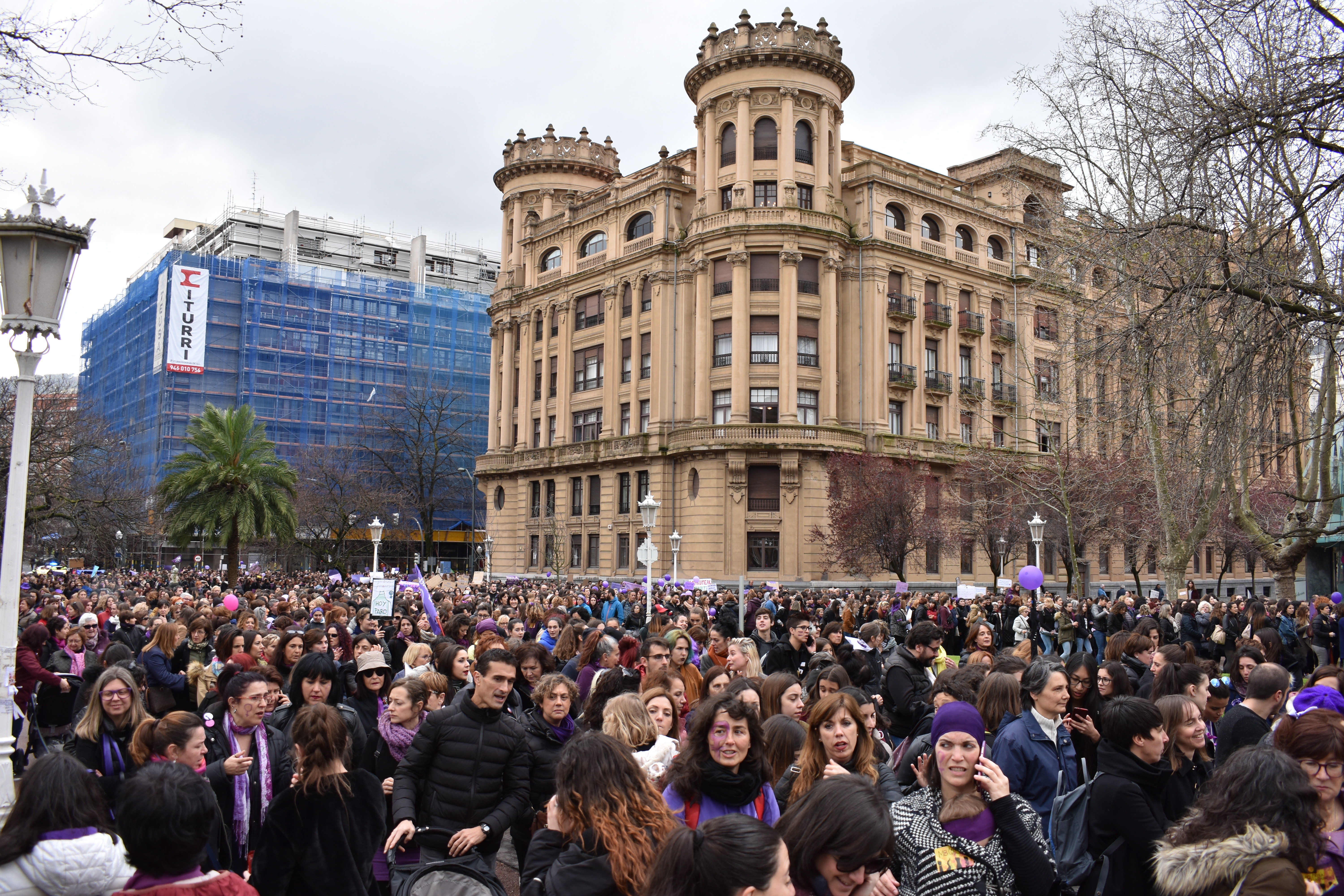 MOBILITY TO POLAND Fifth Photograph “Feminism” Taken by Olatz Ereño Arrizabalaga represents the gaps between men and women in our society. Although the law makes men and women equal, there are still some gaps, such as gender pay gap or dream gap, which can create unfair situations. In order to fight against injustice, the feminists’ call for demonstrations is becoming common in our cities. The biggest feminist demonstration coincided with the International Day of Women, March 8th. In response to discrimination to women in some jobs and to the physical abuse and sexual harassment suffered by some women, 50,000 men, women and children took to the streets of Bilbao. They also chose to wear purple, which symbolizes feminism and equality. As the crowds marched through the streets, they carried banners and shouted slogans in an overall good atmosphere. They stand up for equality between men and women, and thanks to these types of strikes, a lot of women that don't have their own voice, shout to the world what they need.